This year, the 11th grade English class, taught by Ms. Trautmann, has focused a lot on special aspects of America. In particular, we spent a lot of time dealing with topics like gun policy, speeches by American politicians, crime, court cases and health.

As a follow-up, Ms. Trautmann organized a workshop with the German-American Institute Saarland e.V., a binational institution that serves to promote German-American relations through educational and informational work.

Last Friday, Dr Bruno von Lutz, executive director of the German-American Institute, visited us in our school and did an intercultural training with us on how America works.

At the beginning each student received an index card from him, on which we were supposed to write two terms that we directly associate with America.

Many of us wrote food related aspects, for example “burgers”, others directly associated America with famous celebrities, the gun policy, the political system in general or famous cities like Washington D.C. or New York. After a brief discussion of our terms, Dr von Lutz showed us an outline of all the aspects he intended to talk about: stereotypes, intercultural concepts, gestures and language, cultural standards, political correctness, diversity, guns, and finally, immigration.

To illustrate stereotypes to us, Dr von Lutz showed us several advertisements in which stereotypes of different countries were shown.

Through this, we could see that aspects of the German self-image include accuracy, punctuality and organisation. In contrast to Germany, the English self-image includes the upper class accent, style and specialties such as Shepherd’s pie, as well as cultural features such as red telephone boxes.

In regard to intercultural concepts, Dr von Lutz cited the “Iceberg Concept of Culture”. This concept wants to clarify that people who are from another country, may at first not see important culturally practiced things, and are only focussing on the obvious aspects.

An interesting fact is that behaviour is culturally determined, for example in Germany you have to be punctual and if you’re not it is seen as impolite, whereas in Brazil it is totally fine, even normal, to be half an hour late. Therefore, we could state that stereotypes are something that you can't get rid of, they are always present in people’s minds.

The next subtopic was “Gestures and Language”. We learned that there are a few gestures that are expressed differently in Germany and America, for instance “crossing fingers”.

Americans cross their fingers to express “good luck” and Germans are expressing this by forming fists with both hands.

The biggest difference is the use of “you”. In Germany we use the personal pronoun “Du” when we address someone informally, for example friends and family or people we’re close with, otherwise we use the polite form “Sie”, often in the work place.

In America it is just “you”. No matter to whom you are talking to and this way to communicate is also seen as polite and openhearted.

Another difference is the use of language abbreviations in America such as:

“WDYT” What do you think?

“WYSIWYG” What you see is what you get

What also seems to be a difference between Germany and America is Small Talk.

It appears that unspoken rules about Small Talk exist in America. Topics that are always discussed are geography, the weather, sports and children, but you should not talk about politics or criticise the American Government, and most importantly: do not talk about your health.

“How are you doing?” and the response “I’m fine, how are you?” is a typical conversation starter in America, but it is more like a formula, even a ritual and no one is expecting or wants to hear the real answer to the question.

It can be said that culture is like a system of orientation and the cultural standards are building blocks of this system.

Another topic is political correctness. This includes certain forms of expression which, in contrast to others, are appropriate for society, for example:

“Negro” is politically incorrect, instead you are supposed to say “Afro-American”.

“White” is politically incorrect, instead you should say “Caucasian”

“Homosexual” and “Lesbian” is also politically incorrect, rather, say “gay”.

The next topic was “Guns”. First, it can be said that there is a huge difference in owning guns in Germany and America. In order to legally own a firearm in Germany, you must be of legal age, be reliable, have expert knowledge of guns and be able to prove that you have a need for it.

In America it is way simpler. They have the so called “Second Amendment”, which gives people the right to keep and bear arms. This supplemental provision is contained in the “Bill of Rights”, which consists of a total of 10 amendments to the United States Constitution.

There are non-profit sport shooting and training organizations in America.

One example is the NRA (= National Rifle Association). This organization was founded in 1871 in the USA and developed into a gun lobby organization by 1977.

However, this casual, open use of weapons not only serves as an advantage for self-defence, but unfortunately is also the reason that there are so many school shootings every year and that there are many murders in general. An example of a school shooting is the incident in 2012 in Connecticut, at Sandy Hook Elementary School, where 27 people were killed. Other terrible shootings happened for instance in Las Vegas, Nevada, where 58 people were killed or in Orlando, Florida where 49 people were killed. So, we could say that this gun policy or even more, gun culture has advantages regarding self-defence but is also a great danger and easily misused by many people.

The last topic of the workshop was ethnic and racial diversity/immigration.

America is very diverse and characterized by its multiculturalism, which is why it could be best compared to a “melting pot”.

Dr von Lutz noted here that immigration might even be considered a cultural standard in America and that there are expressions like "Mexifornia" because so many Mexicans live in California.

This development can’t be stopped, and America might even become a multilingual country.

I personally enjoyed the workshop very much. It was extremely informative and showed positive as well as negative sides of America. I think it’s interesting to see the difference between the countries, especially that those differences already start with the little things such as Small Talk with its unspoken rules. It is amusing to see how every country has its own culture and customs and still we can see similarities of the countries and a sense of harmony. 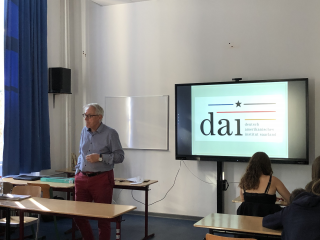 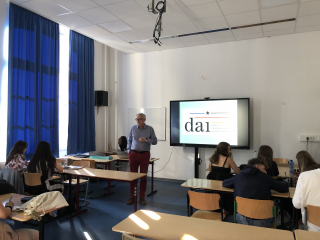