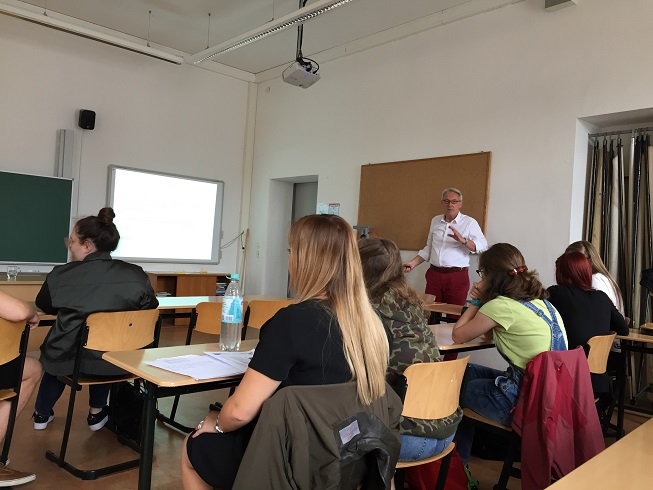 On Tuesday, the 12th of June, our English class (E-Kurs Trautmann) took part in a workshop or presentation by Bruno von Lutz. Dr von Lutz is the chairman in the “Deutsch-Amerikanisches-Institut”. He held a presentation in English for three school periods, and let us participate too. Included topics were: stereotypes, advertising, language, gun control, and a lot more about Germans and Americans. Dr von Lutz told us, that everything he was about to say was generalised, because talking about stereotypes certainly doesn’t exclude prejudice. We were shown a few video clips of German and American advertisements, in which we were asked to find typically German or American things. Bruno von Lutz told us that the Germans are always expected to be perfectionists and always on time. But it is said that they are also rather private and don’t always “open up” very quickly. The Americans on the other hand seem to be rather open and on a public basis. An example that was given to us was, that most Americans would introduce themselves by offering their first name. That way the distance already becomes less.

As far as the topic language is concerned, we learned about “false friends”, which is a term for words that seem similar in English and German, but are completely different in meaning. We even talked about body language and whether or not the use of certain signs is a good idea in different countries.

A rather sad topic in the presentation was gun control. We were shown interviews from people who are in favor of the gun laws. These people said things like: ”It is my right and my freedom to own a gun…”. One interview showed women learning to shoot. They said they wanted to learn how to be able to protect their house and family. In addition to this topic, we also talked about laws, and how they would have to be completely changed if anyone would want to get rid of the gun laws.

All in all, it was a very informing experience. There were funny topics, and ones we talked about on a more serious note. We had fun answering the questions and talking about topics, that one doesn’t talk about every day. This intercultural training made things clear and unveiled facts we had never heard of before.